A couple of weeks ago, I heard about this site called CastingCallClub.com from a friend and eventually I got around to checking it out.  It's a place where creators can link up with talent.  There's a few paid gigs and lots of unpaid gigs.

I figured it was worth trying, so I decided to start by auditioning for a few roles.  I think I sent in about 6 auditions last weekend.  So far I haven't heard back from any of them, but I'm really OK with that.  Most of the parts had at least 20 (and often way more) applicants.

Well, I thought that if the site wasn't going to awaken some new voice acting hobby of my own, it might well prove to be a good way to find talent for TOTM.  So, about an hour ago, I posted a couple of small roles.  My hope is that roles which are too small to offer to friends, colleagues and listeners (maybe they are just 2 or 3 lines long) could be filled by other willing volunteers.

If I get any kind of result, I'll blog about it here in the next couple of months.  If nobody auditions... well, no harm done.

On religion in D&D

Not too long ago, I completed the remastered versions of my first 4 episodes.  The work involved rerecording all the spoken word with a better mic.  I think it was in episode 3 that I tried to lay out a working theory for religion in TOTM.  I said something to the effect of: nobody knows if the gods are real or if faith magic is just a different kind of magic, presumed to come from divinities.

That idea is now about a year and dozens of episodes old, and I realize I have contradicted it.  When Barroc Ironskin committed his act of hubris in ep 25 (or was it  26 ...?) he brought a real curse down on himself and all of Duervar (inspired by Clash of the Titans, btw!).  It's hard to describe what happened as anything other than proof of Gruenmawg's actual existence.  It's not the last time we'll see divine intervention that cannot be ascribed to non-divine, non-sentient 'other' magic, either.

So it seems that I was wrong in ep 3.  The gods are real. Really real.

I had always thought that the 'nobody really knows where it comes from' approach was better.  It solved the problem of overlapping pantheons.  In creating TOTM, I realize that there are so many juicy stories to be found in having actual gods who notice and participate in the world

I think the best solution - and the one I am currently embracing for TOTM, is that the gods are real (no going back on that now) but that they are multiple aspects of greater divinities.  For example, Gruenmawg, god of the dwarves, could be an aspect of any or multiple 'creator' deities.  Hanavee, the Blind Maiden of Hope, could be one of many aspects of a healing deity, or a purity deity, or both.  This approach accounts for multiple pantheons and solves the problem of: "Well, they can't ALL be real!" quite neatly.

Posted by The Manticore at 7:35 AM No comments:

Posted by The Manticore at 4:54 PM No comments:

Saw this on Insta today and it made my jaw drop: 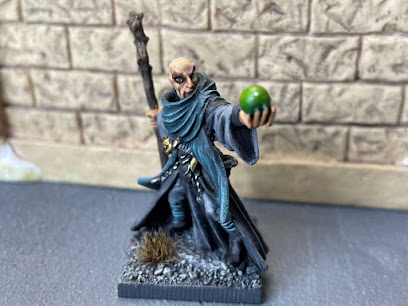 My “Character of the Month” for March isn’t MY character at all. Raphinfel, “The Adored”, is the creation of Jon, producer and creator of the brilliant Tale of the Manticore podcast, which you should all be listening to. As such, Raphinfel’s story isn’t mine to tell, so apologies in advance for those expecting my customary prose. You can hear it for yourself by checking out Tale of the Manticore: 31 short episodes and counting, all really good.

Please check out the rest and all the other great stuff Angry Piper has to offer right here: http://angrypiper.com/?p=4322

If you ever reached out and did not get a reply from me...

Yesterday I went on Reddit and for really no reason at all, I clicked on the 'Chat' icon.  I have never wanted to use Reddit chat before... maybe I was curious, or bored?  I dunno.

What I didn't expect was to find several very old messages from listeners who had reached out.  A few even offered to join the cast with some voice acting (boy, last summer, I really needed actors, too!)

Hey, Reddit... why have a 'Chat' function if it's just the same as the message system?  What a terrible feeling to find out I had unwittingly ignored a bunch of listeners.  I felt like shit about it.  I remember reaching out to a few podcasters when I started.  Some never replied.  Didn't feel great, you know?

I am writing this here to say that if you are reading this now, and you have ever reached out to me and not gotten a response, please know that I didn't get your message & please try again.  I reply to all my email.  Please also accept my apologies.

Posted by The Manticore at 10:01 AM No comments:

Posted by The Manticore at 4:14 PM No comments:

So I was listening to the Save or Die podcast (http://saveordie.info/) episode 160: Start! Thief! in which they talk to Darrold Wagner: the guy who literally created the thief class for OD&D.  Wow... that's living history! (I mean this in the best possible way.)

I recommend the full episode, but the Sparknotes is that the class was created organically, just through the course of play.  It was originally intended as an NPC class, too.  It was not - as I had mistakenly assumed - created as a way to emulate the archetypes in LOTR.

In my current OSR DnD game, I play a thief.  Our homebrew rules don't do race-as-class, and my thief character is also a halfling.  Playing a thief is a very particular experience.  There's not a ton of glory... though there is occasionally a moment or two. The class has low hp, poor AC, and is pretty garbage in combat; going off solo to explore is not only deadly but disrupts the game as it forces the rest of the gang to wait out your little vanity episode; and, the expectation is that the thief is the poison-tester (hey thief, open the chest, open the door, etc etc).  For these reasons, the class is well suited for a support player or a role-player, but not so much for a power gamer.  One nice thing is that the thief does level up quickly.  TBH, I think it takes a careful and conscientious DM to handle a thief in the party.  Deadly traps will eventually take out the thief.  Maybe that's not a problem though... it makes sense even.  A cool death by swinging pendulum blades? Hey, you could do worse...

You know where a thief would really shine?  A solo adventure!  Man, the class seems to have almost been created for it.

The Great Book of Random Tables

Matt Davids, who authors the well known Randon Tables book series and the DiceGeeks podcast, was the first person to give me an interview and some exposure when I first started out.  He just put out a new book and I'd like to show him some love.

If random tables are your thing, you should take a look.

Posted by The Manticore at 6:13 PM No comments:

I 'called in' to Role Play Rescue - a podcast I hugely recommend, with a response to the bonus episode on good & evil.  Here's what I said:

I dumped alignments in my game a long time ago, but only because I never saw how they could contribute to a game.  I think the main problem I had with the alignment system, besides simply being superfluous, was that they tended to be prescriptive, rather than descriptive.  So if I had a lawful good cleric and that cleric did something a lawful good person wouldn't do, suddenly there was a problem.  'You can't do that', was possible.  'Your character wouldn't do that' was more likely, but... hey, can't characters have arcs? Can't they change? Can't they act irrationally?  The concept is too fluid to make into a jello mold, at least for me.  If that weren't enough, the idea of alignment languages seemed ... well... Come again? I never really got it, and I can easily say I have never missed dropping it from my rules set.  It's not to say there is no good and evil in my games - there is - I just don't see any good reason to put it on my character sheet.