Why Am I Not Using 5e Like A Normal Human?

5e seems to be truly beloved. It's by far the most popular set of rules in use right now. Am I being deliberately obtuse, or trying to harness some kind of 'Old School' mojo?

The truth is, I have never played 5e. That's the reason I'm using B/X for TOTM. When I started my little experiment in storytelling, I had never even seen the rules.

(A little aside here... imagine my horror upon reading the 5e rules and finding a demonstration character in it named 'Umara' ... oh come on!! I swear it's a coincidence. Now, if I ever name a character Margan Ironwolf, you can throw things at me).

I have since read the basic rules and listened to a lot of hours of 5e games in podcasts. I think I pretty much get it, and I like the system. It seems a bit overpowered for my tastes (0 level cantrips do HOW much damage???) but overall it seems ... well some people use the word 'elegant' and I think it's deserved. In particular, I like that:

1) they start off level 1 characters with max hp (a rule I thought was a little off the wall when I used it for my B/X characters).
2) ascending AC just makes more sense. I wish I had used that, but it's too late now.
3) the concepts of advantage/disadvantage are wonderful; if I haven't used them yet, I'm sure I will.

I don't regret using B/X for TOTM though - not at all. I know it well, and it's rules light. For an audio medium, I think rules light is a big bonus. Savage Worlds seems extremely rules light and I'd love to try it out, but the rules might be too hard for anyone to follow if they don't use the system already. Ditto for Mythic - I think that could make for a very interesting podcast. Somebody, please go make a podcast for Savage Worlds or Mythic... or both! I will listen! Like with 5e, I didn't consider either of these systems for TOTM because I didn't know they existed.

TOTM was my way to get back into D&D after a long, long time away. Really long. My last campaign used 2nd Ed. (I didn't use 2nd Ed for the show because it is a bit too 'crunchy' for a podcast and I didn't want rules errata to clutter up my story any more than necessary.)

If this whole COVID thing does go away in the next little while, I'm going to join a meetup or something and get some hours invested in 5e. Who knows, maybe it'll be a good choice for a Season 2 if I get that far. Then again, B/X is serving me well - and it turns out there's a niche OSR community. I hope being part of one camp doesn't exclude the other, because the system doesn't really matter that much in the end - it's all just swords and sorcery.
Posted by The Manticore at 6:03 PM No comments:

Map of the Ruins under the Tower, Level 1 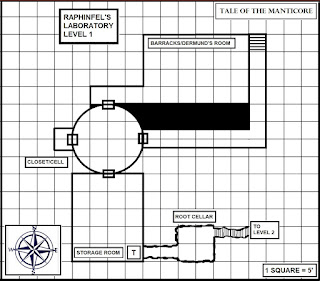 Posted by The Manticore at 3:06 PM No comments:

Email ThisBlogThis!Share to TwitterShare to FacebookShare to Pinterest
Posted by The Manticore at 3:03 PM No comments:

Posted by The Manticore at 3:02 PM No comments:

How Solo RP Just Gobsmacked Me

Lately, perhaps it's all this time alone with my thoughts as we make our way through the pandemic, I have been giving a lot of thought to various ... I dunno... narrative theories. What makes a story? What makes it compelling? I've already talked about arcs, so I won't go down that rabbit hole again (and it is a rabbit hole...). Today I thought I'd share some thoughts on something closer to my own project: the randomly generated story. Can it work? I hope so, because TOTM is largely created this way.

I'd been listening to Roleplay Rescue Podcast a lot. The host, the thoughtful and refreshingly honest, Che Webster, was talking about solo rpg'ing in one or two episodes. I didn't even know this was a thing. The only experience I had of it was through the Iron Realm Podcast (also very near and dear to me, and definitely a big influence on TOTM). Anyway, Che was talking about this system called Mythic. It's a GM emulator and it ... actually works. If there's any doubt, check out Me, Myself and Die on Youtube for some extreme brilliance by way of solo rpg'ing. (Seriously, it's awesome.) It all comes down to a pretty simple mechanic, or set of them, which go: Ask a question, randomly determine the answer using dice and logic, and sometimes roll for random happenstance, also determined with logic, context, imagination and luck.

I've considered using such a system in my own 'writing' such as it is, but I keep finding I don't run out of ideas and the story you hear in the podcast basically pours out of me, writing itself. Still, I wanted to try this thing for myself, so I took a baby step. I used an extremely spare system, supplied by RPGCalligraphy (Insta). Here's the system: Start with a scene/premise idea and just start asking questions. Use the following table to guide the narrative:

That's it. For combats and other fine mechanics, just use whatever game system you like... or don't. Here's what my first try looked like:

Scene/Premise: My character is a burglar. Inside the baroness' bedroom in her manor/keep. The Baroness is here. My character wants to steal her diamond pendant. Go.

Is baroness sleeping?
Six. Yes and. Snoring loudly.
Is the jewelry box by the bed?
Five. Yes.
Can I sneak up to it without waking her?
One plus one for snoring loudly is two. No. She tosses and turns.
Looking at the jewelry box, can I see if it has a lock? And is it locked?
One. No and. It's not locked. It's open.
Is there a window here?
One. No and. No other exit here or near. She is a paranoid woman.
Can I see the jewel in the box?
Yes and. There are other jewels there too.
Can I crawl under the bed and inch my way to the table?
Six. Yes and she snores so loud you know she's fast asleep as you do.
This action takes less time than you think but still takes a full hour. It's two am.
Can I reach out and grab the box?
Five. Yes. Got it. Can I inch my way back?
Five. Yes.
Can I get out and into the hall? Plus one for something fairly easy.
Three. No but. She doesn't wake. Can I wait an hour and try again?
Six. Yes and. I get all the way back to point of entry.
Can I climb out without being spotted?
Six. Yes and. I manage to evade several guards and get all the way to the outer wall.
Can I get past the wall and get away?
Six. Yes and. Don't even need to go over. I dug a tunnel under in advance.
The next week I look for a fence. Can I sell I The jewels?
Four. Yes but.
The fence is not trustworthy and he knows my name and face...


And so on and so on. It works... gosh darnit... it really works. If the above system is a little too simple, I think the Mythos system would take care of the "X factor".

Anyway, just wanted to share this cool thing I found. Probably old news to many of you. At the very least, let me say thanks to RPGCalligraphy, Che Webster of RPRescue, Able of The Iron Realm, and Trevor Duvall of Me Myself & Die.

Posted by The Manticore at 6:39 PM No comments:

To Arc or Not to Arc? Which is better?

So lately, from where I’m at in the story of Tale of the Manticore, even though it’s early days, I can envision a middle campaign and I can even envision the late campaign - although that’s pretty hazy, admittedly, at the moment. Anyway, I’ve been wondering: does a podcast like TOTM need to have an over arcing story? Does it need to have symmetry and perfect resolution? In other words, does it need an arc? I think common wisdom would say, "Yes, it does. Stories need arcs." Everybody’s familiar with the plot graph and a story that doesn’t resolve it's inciting incident/conflict might feel very dissatisfying. Think about a movie like Shawshank Redemption. It is immensely satisfying by the end, and that’s because it has a wonderfully constructed plot graph. King put in the time at the beginning to plant seeds that grow to fruition later on and result in this incredibly satisfying outcome.

However, there are stories that don’t have such an arc, and yet they are still satisfying. Consider for example Star Wars, which is definitely a story with an arc, even if they arguably wrecked it at the end. Compare that with Star Trek, which is just an endless series of episodes that doesn’t really go anywhere. (I’m sure somebody will tell me that there is an arc and the characters do develop and that may be true - I’m not a trekky by any stretch - but generally Star Trek is kind of in the James Bond mode of storytelling. It’s episodic. So, lately I’m wondering if TOTM should be a Star Wars or Star Trek. James Bond or Shawshank Redemption? I’m going for a sense of real old-school DND - those games aren’t always masterplots, are they?
They're often small modular adventures that may or may not all link together in a way that completes a picture by the end. I'm leaning toward episodic, but with rich continuity, logic and lore that binds everything together. The more I struggle with the idea, the more I feel that a carefully constructed arc must necessitate a story on rails, which is the opposite to what I'd like to achieve.

Deep thoughts this time, hey?
Posted by The Manticore at 6:06 PM 8 comments:

Posted by The Manticore at 11:51 AM No comments: