Continued from: The medallion she needs to find is probably in Sir Gillinton’s bed chamber or treasury.  Hopefully she’ll find it quickly.

She opens the door and peers into the hallway beyond.

Is the hallway occupied?

The hallway is empty, but it is lit with an oil lamp on a small table at the end and she can hear two low voices.  There are 2 door set in the wall between her and the light source.

Can she sneak to the first door without being heard?

Applicable clichés?: Quiet as a Mouse

Like a shadow, she moves to the first door, presses her ear against it and listens.  She can’t hear anything on the other side but she does hear a part of the conversation she couldn’t make out earlier.  “….time to do the rounds downstairs…” Someone grabs the lamp and the hall is cast in darkness.  Just the way she prefers.

Luck is with her.  At least for now.  She tries the door.  Is it locked?

Not locked but barred from the other side.  There’s no way she’s getting through.

Cursing, she moves on the the next door.  At least whoever was talking has moved on – they took their light with them, too.

She tries the new door.  Is it locked?

It’s locked but at least it’s a mechanical lock se in the door and she can probably pop it open with her tools.  She fishes a probe and a hooked wire from a wallet she keeps at her belt and goes to work.

Does she successfully pick the lock?

There’s a gratifying little snap and the door swings open quietly.  The room inside is not lit, but Neffia is used to working in low light and she can see well enough to work.

This is some kind of bedroom.  There’s a door on the other side of the room, probably leading to another hallway parallel to the one she was just in.

Is this the master bedroom?

This is a servant’s bedroom, which means, the master bedroom is probably not even on this floor.  Neffia has to make a choice. There’s a room right next to the one she’s in that has something in it worth protecting, but it’s almost certainly not the room containing the silver medallion she’s after.  The chances are almost certain that the master bedroom is on a different floor than the servants’ room.  She’ll have to go downstairs to reach her objective.  Perhaps the master of the house dislikes stairs or something… the lazy bastard…

Posted by The Manticore at 6:09 PM No comments:

Thanks to Splinterverse who boosted my little game, One Shot in the Dark, in one of his regular YouTube Videos.  If you'd like to see it, jump ahead to 40:41 (btw, it's not really a review so much as a product announcement):

Also, since I was off the grid for a couple of weeks while taking a vacation, I never posted the photo to match my 'on-air' playthrough of the first level of the game.   So, better late than never, here it is. 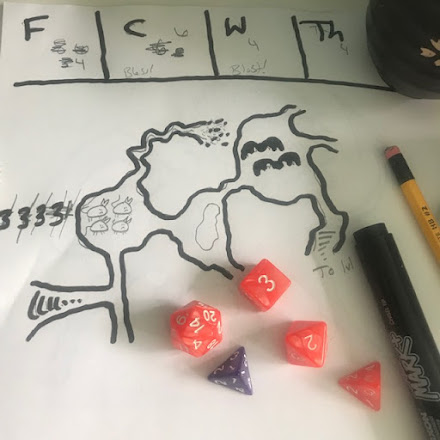 Posted by The Manticore at 9:37 AM No comments:

Posted by The Manticore at 7:00 PM No comments:

Posted by The Manticore at 8:01 AM No comments:

The appointed night arrives and the mission begins.  Neffia the Small looks up at the second story window. Can she scale the wall?

She is able to scale the wall but when she reaches the window, she finds that it is barred.  The bars were thin and recessed and she had not been able to see them from below.

Well, she’s small… can she squeeze through?

She is able to quickly slip through the bars and finds that the shape of the bars are such that they would allow her to pass through fairly easily but block any pursuers if she needs to make a run for it later.

I think with a Yes And, the room is unoccupied.  What kind of room is it?  Hmm… I wonder what kind of room this is.  Is there a way to randomize that in the rules? No, not really, so I’ll just say: it’s 50-50 a storage room, or bedchamber.

That’s lucky, too, thinks Neffia.  A storage room is likely to remain unoccupied.  Is there anything useful in here? A rope? Some oil?  Let’s roll…

Just a bunch of crappy paintings stacked against the wall and some old books nobody would ever want to read.  Some crates that have been nailed shut and an empty trunk.  She gently slides the trunk under the window to make a step to the window in case she needs to make a hasty exit.  She congratulates herself on her smart idea and sneaks across the room to the door.

The medallion she needs to find is probably in Sir Gillinton’s bed chamber or treasury.  Hopefully she’ll find it quickly.

She opens the door and peers into the hallway beyond.

Posted by The Manticore at 6:28 PM No comments:

Today is a pretty cool day... 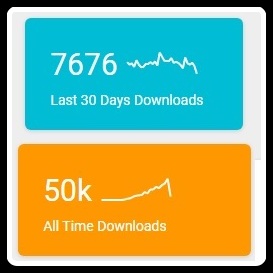 4       Some kind of abandoned treasure/boon

*Items in italics can only be encountered once

Posted by The Manticore at 7:58 AM No comments:

Artificers are dwarves who were born with the special gifts of both artistic ability and of drawing forth and preserving the innate magical that exists in all gems of a certain size and quality.  Artificers sacrifice some training in the use of weapons and armor to hone their special skills, but in exchange they gain some ability to use magic, as well as certain special class features (see below).  The prime requisite for an Artificer is Intelligence.

RESTRICTIONS: Artificers use six-sided dice (d6) to determine their hit points. They may advance to a maximum of 12th level of experience. They may not wear armor nor use shields and may only carry a dagger or a staff for a weapon. In combat and in terms of levelling up, Artificers use the Magic Users’ tables.  An Artificer character must have a minimum Intelligence score of 13.  Artificers must possess at least one gemstone, of any value, to cast spells.  This gemstone is not used up, damaged or in any other way affected by the casting.

SPECIAL ABILITIES: Artificers share the same saving throws as regular Dwarf characters.  They also have infravision (heat-sensing sight) which allows them to see 60 feet in the dark. They share all other racial abilities of regular dwarves, and so are able to find slanting passages, traps, shifting walls, and new construction one-third of the time (a roll of 1 or 2 on Id6) when looking for them. They speak Common & Dwarvish, plus the languages of gnomes, kobolds, and goblins.

Artificers can cast spells, although they gain them more slowly than Magic Users, using the Clerics’ tables for spell acquisition.  This means that they do not gain their first spell until level 2.  They do not use Clerics’ spells, however.  They are restricted to just the following, with others added at the DM’s discretion:

Beginning at 2nd level, Artificers gain the ability to bind the magic they draw from gemstones to objects that they create.  This binding is permanent.  For example, an Artificer might bind a spell of Light to a golden statuette that they created, or a crafted stone archway and door might be enchanted with a Hold Portal spell and linked to a password.  In order to do this, the Artificer must spend one month creating the art that will receive the enchantment for each level of the spell they intend to bind into it.  Additionally, a gemstone worth at least 1000gp must be used in the creation.  This gemstone might be powdered, buried whole or featured prominently in the work created.  In any case, the gemstone will become a permanent part of the artwork.  The enchantment process is highly dangerous.  For each level of the spell being made permanent, there is a 5% (1 in 20) chance that the process will fail spectacularly.  This failure might come in the form of an explosion, or some other wild magic event (DM’s discretion), but in any event, it will force a saving throw vs Spells to avoid extreme physical damage or some other terrible result commensurate in scope with the spell being drawn from the gem.

Posted by The Manticore at 10:35 AM No comments: