Saw some cool dice towers online and thought, "I'd like to build something like that." But, I didn't really want to make a dice tower... so... just a tower then!

I started with a can of tomatoes (I ate the tomatoes) and then some foam I found in my condo's recycling room.  Cut them into bricks and glued them on (1).  I left spaces for the windows and door.  I also cut both ends off the can.  Not really necessary to do both sides, in the end.

Next, I did a modpodge/black paint sealing coat (2).  The roof was done on carboard with eggcarton bricks (3).  Forgot where I heard this would work well, but it really does.  From now on, I collect egg cartons.  Easier than foam core and looks at least as good if not better.
After, I coloured everything grey and then did some bricks a different colour (4).  Brown, dark grey, etc.  A light drybrush with beige came after.
The next step is the blackwash and gluing on the popsickle stick door and trapdoor (5).
Finally, I attached the roof and gave everything a light modpodge coat to give it a satin gloss (6).  You could leave it matt, but this looks better and it adds more glue, which is always good.
I'm happy with the result overall (7).  If I did it again, I'd make the bricks smaller, the arrowslits smaller, and the crenellations taller.  The way it is, the scale is a bit wonky.  Still, it's not terrible by any stretch.
If you've got some basic craft supplies, I'd encourage anyone to give this a go.  It's fun and free.

Something Keeps Bringing Me Back to Emily Dickinson 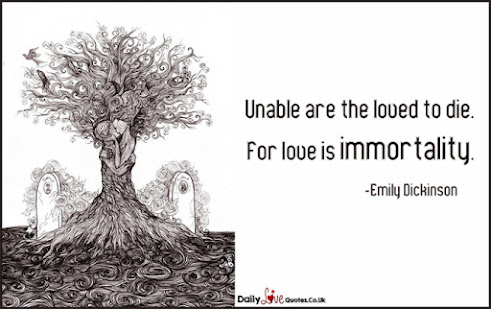 It's true that I'm an English teacher and I studied poetry in the way way back times, but I never really understood or gravitated toward Emily Dickinson.  I was more into Poe for poetry, or Edmund Spenser - both of who, now that I think of it, were writing fantasy stories more often than not.  Anyway, when I was looking for the perfect poetry to use for TOTM, I searched the internet, hoping to find the right words that would fit the tone of my universe and not once, but twice, Emily Dickinson proved to be the best choice.  I think I need to revisit her work and give it another go.  Maybe I was just too young to get it when I was in university.

Posted by The Manticore at 5:51 PM No comments:

Posted by The Manticore at 7:37 PM No comments:

The Good, the Bad, and the Weird 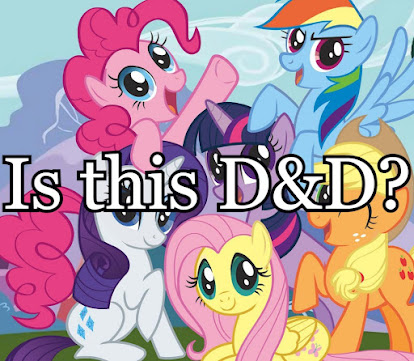 Last week I went to a 5e game at a live table, all with strangers met on Discord.  I knew the vibe would be silly cartoon and I was ready to embrace the experience.

THE GOOD: I really liked the people at the table,  They were around my age, which was kind of nice, and everyone was a cool hang.  Would be happy to game with any of them again.

THE BAD: I'm not sure we really played 5e, or even D&D.  Let me explain.  The GM, in an effort to be entertaining (wait, shouldn't this be listed under 'Good'?) had prepared a lot of... stuff.  There was a board game on the table with a plastic volcano. Push a button and tribal drums played.  There were cards, from the game ready to be used as well.  My cards were: crowbar, fishing pole and snorkel gear (!!!???!!!). In our 3 hour session, we spent an hour getting our characters together and saying hello to each other, another hour watching the GM performing various NPC voices and setting the scene (Strixhaven), and an hour playing.  The playing was a single combat situation which my character more or less needed to sit out because they couldn't do anything (an archer vs a swarm of bats). Round one of combat took 25 minutes. So... did I play?  Felt like a no.

THE WEIRD: Where do I begin? The full 3 hours were bonkers strange from start to finish, mostly due to the contrast between a table full of normal adults and a story/game happening that was unabashedly in the cartoons-for-6-year-olds camp.  It was a hair's breath away from fetishistic, in my view. I wanted to pinch myself multiple times.  I almost laughed out loud several times, but not at jokes. Maybe weirdest of all was the apres-game mutual congratulations on a great session and a desire to schedule the next.  I was kind of thunderstruck during and after, but also a little giddy from the 3 hour vacation from normal. (Is this the appeal? I kind of get that. Would never do it again, but I kind of get that.)

(The Sad): I'm going to have to break up with this group in a way that doesn't feel personal.  It isn't.  I really liked those folks, but you couldn't pay me enough to do it again.  Have any of you had to break up with a group? I've done it a couple of times in the past year and I don't think I'm very good at it.

Sweet! A Lovely Review for OSitD!

Thanks to Lexi, of The Gaming Table, for the very kind review.

If you're keen to see it, you can watch it right here 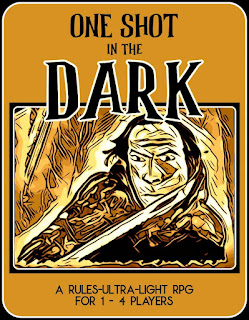 Posted by The Manticore at 3:03 PM No comments:

I've been hoping to get back to the table since I started my show over 2 years ago.  Well, it finally happened.  In the end, there was a smaller turnout than we wanted and it started with just 2 of us, then a third.  But you know what? It was great!  I'd learned a lesson from a failure a few months before.

In February, I had put up an ad looking for players and got a few responses that were promising.  2 of the guys were local - so local that I suggested we meet for coffee.  This was a mistake.  Without the focus of 'a game happening 'right now' in front of us, the meeting felt strained and awkward.  One of the guys was incredibly late, forcing the first 2 of us to smalltalk for over 45 minutes before the third even arrived.  It just didn't work out.  So I learned from the misstep and realized its better to start a game almost right away.

But.... I still have one more quest.  I want to try 5e D&D and I don't want to DM it.  I want the player experience.  I found a group through Discord in Toronto and ... well, I'll let the jpg speak for itself... 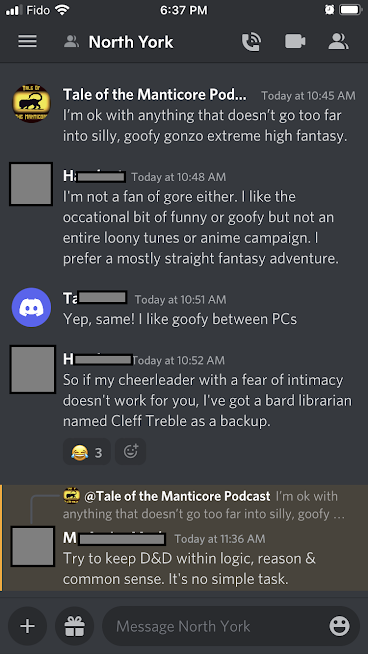 So I was getting a certain vibe ... it was not going to work.  The game got postponed, so I didn't even find out.  It's been rescheduled for this week, and I think I'll go.  I'm going to play it their way, silly pun-names and all.  Just once.  Then I'll at least have tried 5e.

Posted by The Manticore at 4:44 PM No comments:

Posted by The Manticore at 8:57 AM No comments: