Sounds like the first line of the world's dullest riddle.

Today I thought I'd muse about how much I feel the podcasting community is so much like the early days of hardcore and new wave, and the not-exactly-early days of punk.  I'm thinking late 70s and early 80s.

Anyone who has see Henry Rollins do spoken word is probably a fan - he's that good.  Turns out the guy can write, too.  If you get the chance, pick up 'Get In The Van' and prepare to have your mind blown.

His band, Black Flag, basically DIY'd their way into relevance.  Tour, tour, tour.  Show, show, show.  Poster campaigns, articles, interviews ... it was nonstop.  Relentless.  Bands would sleep at other bands' homes - or at their fans' homes.  There was a community.  There was a scene.

I feel that the RPG podcasting scene has a lot in common with this ethic.  There is definitely a 'Scene' going on with RPG podcasts.  There's also a community that helps each other out, cross promotes, does guest appearances, etc.  Interviewers and interviewees become friends, not entertainment symbiotes.  Most of all: there is some amazing creative work being done and new ground is being constantly broken.  It's exciting to be a part of.  The RPG Podcasting community probably lives in a world of comfort that Black Flag would have literally killed for... and we probably get into fewer fights and have fewer cups of piss thrown at us.  Otherwise, it's basically the same, right?

Posted by The Manticore at 2:25 PM No comments:

Map of the Goblin Caves 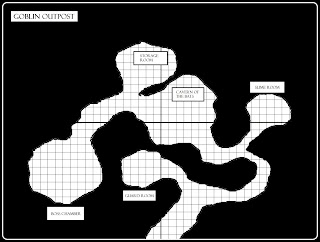 Posted by The Manticore at 7:54 PM No comments:

Posted by The Manticore at 8:45 AM No comments:

Lately I have been skimming through both of these game systems.  I think both have something to offer, though neither one - to me - appeals enough that I'd want to fully invest in a switch over.

I think that if you treat each of these systems as 'an a la cart' you can tweak OSR DnD (Old School Essentials, even better) to a homebrew that runs well without having to relearn an entire system.  Much of B/X is not broken, and doesn't really need fixing, in my opinion, but there are a few things I would potentially use.

I like the ideas of damage reduction for armor, but probably would not use it.  It might be worth experimenting with, though.

Eliminating Saving Throws and replacing them with appropriate ability checks is, I think, a great idea. It makes sense and it eliminates a table that has always felt arbitrary anyway.

Falling below 0 hp does not always mean death but can mean anything from unconsciousness, to disfigurement, to death, depending on a die roll.  This might be worth adding is B/X is too hard for your players.  It's better than the 5e death save mechanic, I think.

Having three classes does make sense to me and might be worth doing for some games.  Clerics and Magic users are all just rolled up into 'The Wise'.  OK, I get that.

Renaming classes as 'vocations' and races as 'species' just adds baggage to the learning curve.  I don't care for this at all.

Saving throws in the White Hack are a single number for all saves.  I have used this in play, and it is better than the B/X rules which are wonky (apparently to balance out the pros and cons of other classes).

The Auction Mechanic is a neat idea.  I could see this being used in a chase scene.  Two contestants basically bet the other that they can roll within a smaller and smaller window on a d20.  It sounds like it would be fun at the table and it even makes sense.  In a chase, you might well take a big risk to get away.  Would this work in podcast form...? Probably not for a solo gamer like me.  I'd be betting against myself and all the fun might drain out the bottom.  Cool rule though.

A couple more links. I hope you enjoy them.

Posted by The Manticore at 4:45 PM No comments:

Posted by The Manticore at 9:12 AM No comments: